Sleeve gastrectomy for weight loss was first described as a two staged procedure in 1993, being the first component of a biliopancreatic diversion with duodenal switch. Today it is a primary standalone procedure where roughly 80% of the stomach is removed. It is currently the fastest growing and most popular bariatric procedure, due to its excellent results and safety profile.  It is one of the safest elective surgeries involving the gastrointestinal system.

After exploration of the peritoneal cavity, the patient is placed into steep reverse Trendelenburg position to drop away the intestines and omentum, and a liver retractor is placed to expose the stomach and hiatus. The pylorus of the stomach is then identified and the greater curve of the stomach elevated. A laparoscopic ligasure is then used to enter the lesser sac via division of the gastro-colic ligament. The greater curvature of the stomach is then dissected free from the omentum and the short gastric blood vessels. The dissection is started 5 cm from the pylorus and proceeds to the Angle of His.

A gastroscope or calibrated bougie is then placed along the lesser curvature of the stomach. A vertical sleeve gastrectomy is then begun 5 cm proximal to the pylorus and extending to the Angle of His. A laparoscopic linear cutting stapler is used to serially staple and transect the stomach. The transected stomach, which includes the greater curvature, is completely freed and removed from the peritoneum through the 15 mm trocar site.

The staple line along the remaining tubularized stomach is then tested for any leak through insufflation with the gastroscope while submerged under irrigation fluid. The staple line is evaluated for bleeding. The fascia is closed at the 15 mm trocar site. The skin is close and sterile dressing placed. 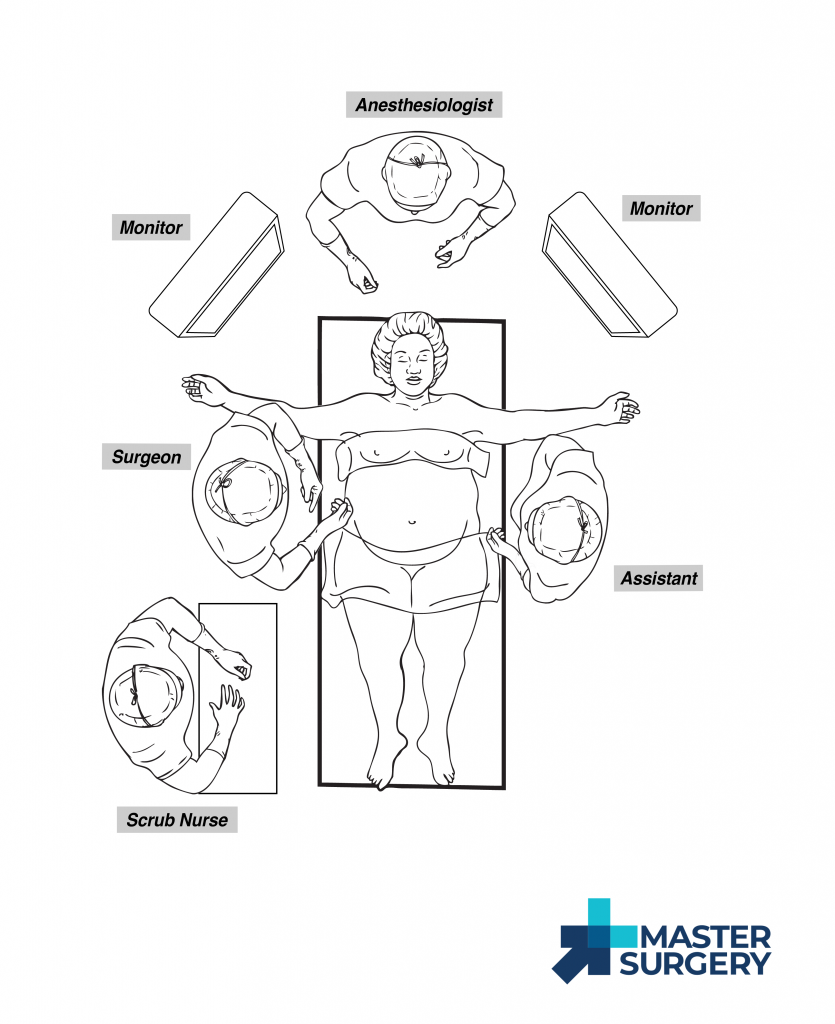 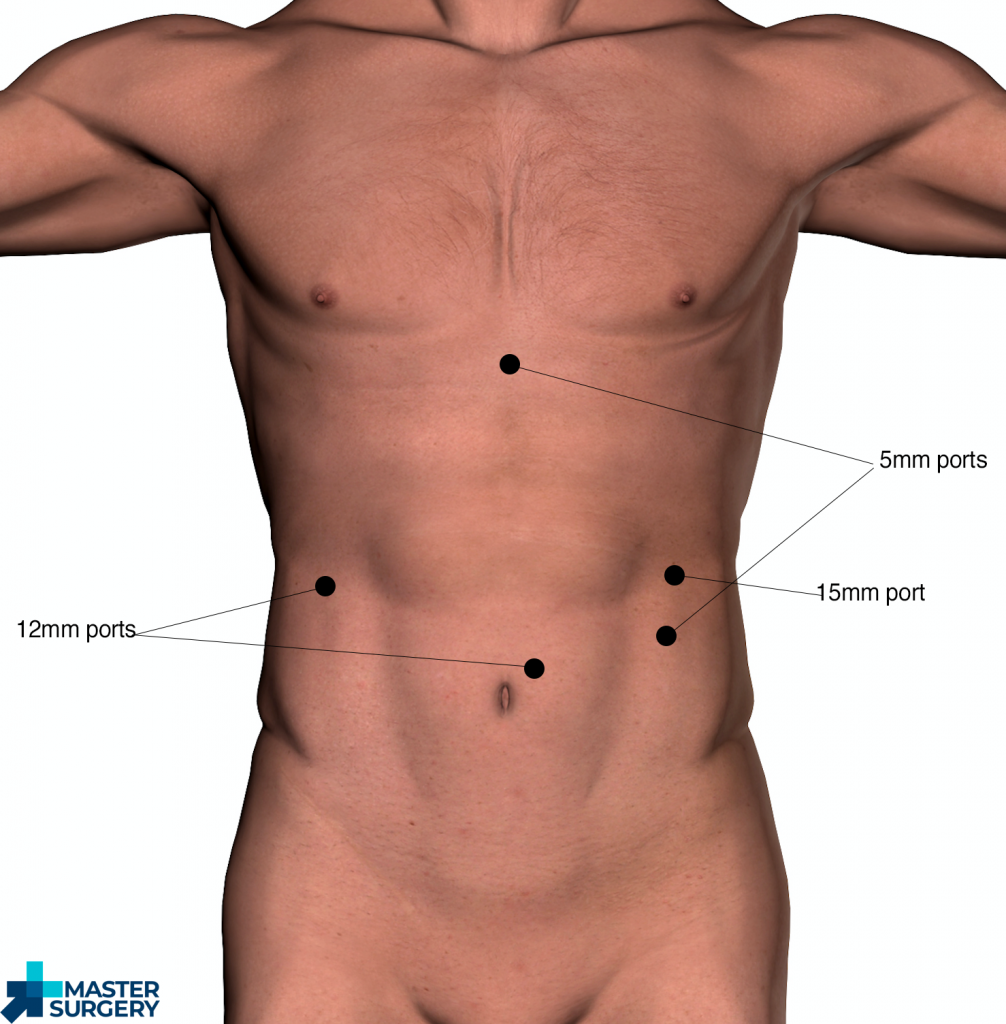 INDICATIONS FOR PROCEDURE: This is a 30-year-old female who has been overweight for many years and has tried multiple different weight loss diets and programs. The patient has now begun to have comorbidities related to the obesity. The patient has attended our bariatric seminar and met with our dietitian and psychologist. The patient has read through our comprehensive handout and understands the risks and benefits of bariatric surgery as evidenced by the signing of our consent form.

PROCEDURE IN DETAIL:  The risks and benefits were explained to the patient. Consent was obtained. The patient was taken to the operating room and placed supine on the operating room table. General anesthesia was administered with endotracheal intubation. A Foley catheter was placed for bladder decompression. All pressure points were carefully padded, and sequential compression devices were placed on the legs. The abdomen was prepped and draped in standard, sterile, surgical fashion.

All trocars were placed in the same fashion using local anesthetic and a 15 blade to make a skin incision. The trocar pattern consisted of a 5mm trocar placed 15 cm below the xiphoid process just off the midline to the left. We used a 5mm 0-degree scope and an Optiview trocar to gain abdominal access and the abdomen was insufflated to 15mmHg of pressure without change in vital signs. An additional 15mm trocar was placed in the left upper quadrant. A 5mm trocar was placed in the left flank. The original 5mm trocar was upsized to a 12mm trocar and an additional 5mm trocar was placed in the right upper quadrant. A Nathanson liver retractor was used to elevate the left lateral lobe of the liver and this was placed in the subxyphoid region. We began dissection by taking down the greater curve of the stomach from the omentum and its attachments. We used the Maryland LigaSure to do this. We began a dissection proximal to the pylous roughtly 5 cm and transected up through the short gastrics into the level of the left crus. There were some scant posterior attachments and these were taken down. Once the stomach was completely mobilized, we then performed an EGD through a bite block. The scope was placed transorally into the esophagus, stomach, and duodenum. No additional pathology was noted. We left the scope in place as a bougie sleeve. The stomach was desufflated. We then performed a vertical sleeve gastrectomy using one green load and 6 additional blue loads. These staples were powered stapler, Echelon by Covidien 60mm. With the vertical sleeve completed, we placed the specimen in the left upper quadrant and performed a leak test. The endoscope was used to insufflate the stomach. While we irrigated over, no leaks were noted. The irrigation was removed and the endoscope was also removed. We then placed Evicel surgical glue along the remainder of the staple line. With the glue in place, we then removed the Nathanson liver retractor, placed the specimen in the EndoCatch bag, and removed it from the 15mm trocar site. With the specimen removed we then closed the fascia using a #1 PDS in a Weck fascial closure device. With the fascia closed, we placed local anesthetic and closed the skin with 4-0 Monocryl. Sterile dressing was placed after all trocars had been removed and the abdomen desufflated. The patient was seen gently waking from anesthesia, transferred from the OR table to the stretcher, and was re-evaluated in the postoperative holding area.