Symptomatic Cholelithiasis.  – Classic symptoms colicky pain in the right upper quadrant radiating to the back and to the shoulder.

Acute Cholecystitis – Inflammation of the gallbladder

Difficulty or variance in surgical anatomy

The Hasson open technique is used to gain abdominal access in the umbilical region. A 12mm trocar is placed. The abdominal cavity is insufflated to 15 mm Hg. A 30° 10-mm laparoscope is advanced into the abdominal cavity. Three 5-mm trocar are placed, the first in the sub-xiphoid region, the next in the right mid-clavicular line, and the last in the right flank. The table is then adjusted to place the patient in a reverse Trendelenburg position with the right side up.

The lateral grasper is applied to the fundus and used to hold the gallbladder cephalad over the dome of the liver; the medial grasper is used to retract the infundibulum caudolaterally. This maneuver straightens the cystic duct ie, retracts it at 90° from the common bile duct (CBD) and helps protect the CBD from inadvertent injury.

The goal of the dissection is to expose the “Critical View of Safety,” which consists of visualization of the cystic duct, cystic artery, and the lower 1/3 of the gallbladder dissected free from the liver edge. This is done using the L-hook and the Marilyn dissector. The cystic duct and artery must be carefully dissected and identified in the triangle of Calot to obtain this critical view.

The key to obtaining the critical view is complete clearance of the areolar tissue in the subhepatic space. With the infundibulum held caudolaterally, the hook is used to score the anterior peritoneum overlying the infundibulum−cystic duct junction. Next, the peritoneum is incised along the medial aspect all the way to within 1 cm of the liver, and the incision is continued cephalad toward the fundus of the gallbladder. The gallbladder is then retracted caudomedially, and a similar dissection is carried out on the lateral surface.  At this point, the surgeon should be able to identify the cystic duct and cystic artery entering directly into the gallbladder; this is the critical view.

3.    Clipping and division of cystic structures

Once the critical view has been achieved and the cystic structures clearly identified, the structures can be clipped and divided, usually two clips proximally and one distally.

4.     Mobilization and removal of gallbladder

Once the cystic structures have been clipped and divided, the infundibulum is retracted cephalad. A hook or spatula is used to develop a plane in the areolar tissue between gallbladder and liver with smooth sweeping movements from right to left and back again. The traction-countertraction rule is essential here. Before the last strands connecting the gallbladder to the liver are divided, a final inspection of the gallbladder fossa and the clipped cystic structures should be carried out. A 5-mm grasper is applied to the gallbladder and used to hold it over the right upper quadrant. The 10-mm laparoscope is exchanged to a 5-mm laparoscope and transferred to the subxiphoid port, and an endoscopic retrieval pouch is inserted through the umbilical 12-mm trocar. The gallbladder is placed in the bag, which is then cinched closed.

The subxiphoid port and the two 5-mm ports are removed under direct vision, followed by the Hasson trocar. The fascia is closed at the umbilical port by using the two U stitches placed at the beginning of the procedure. The skin is then closed. 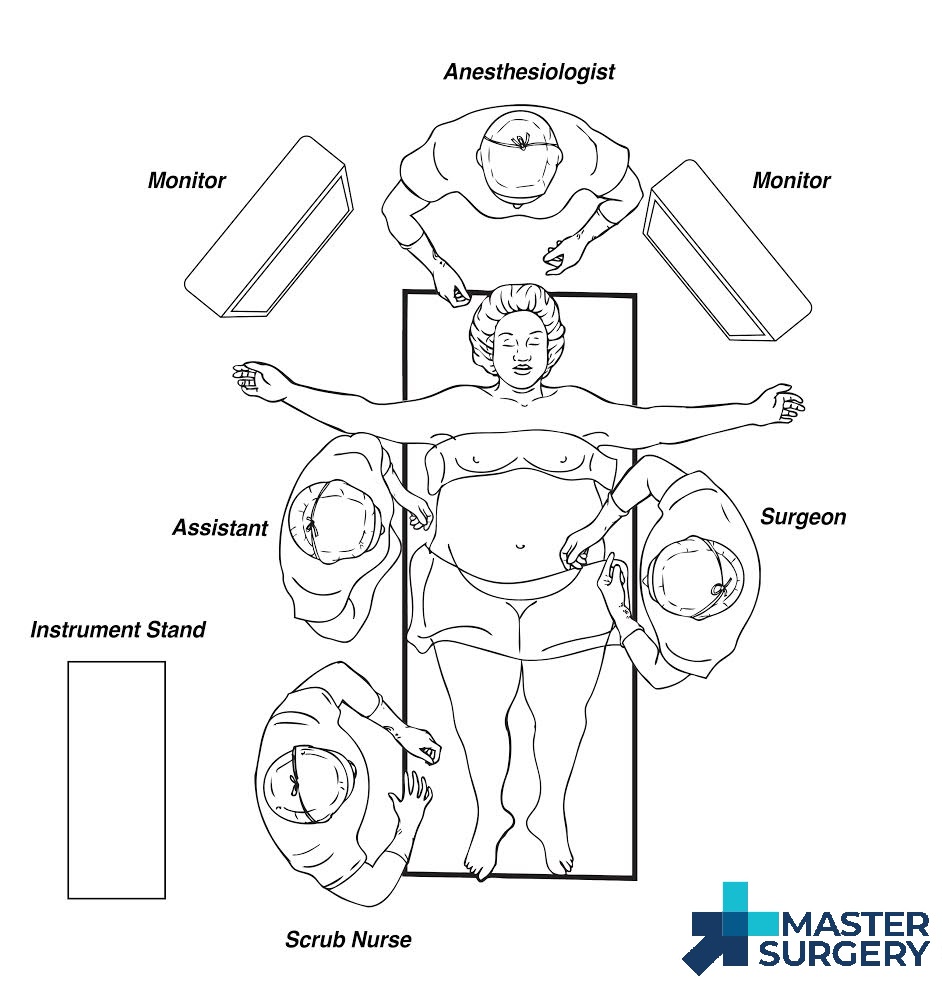 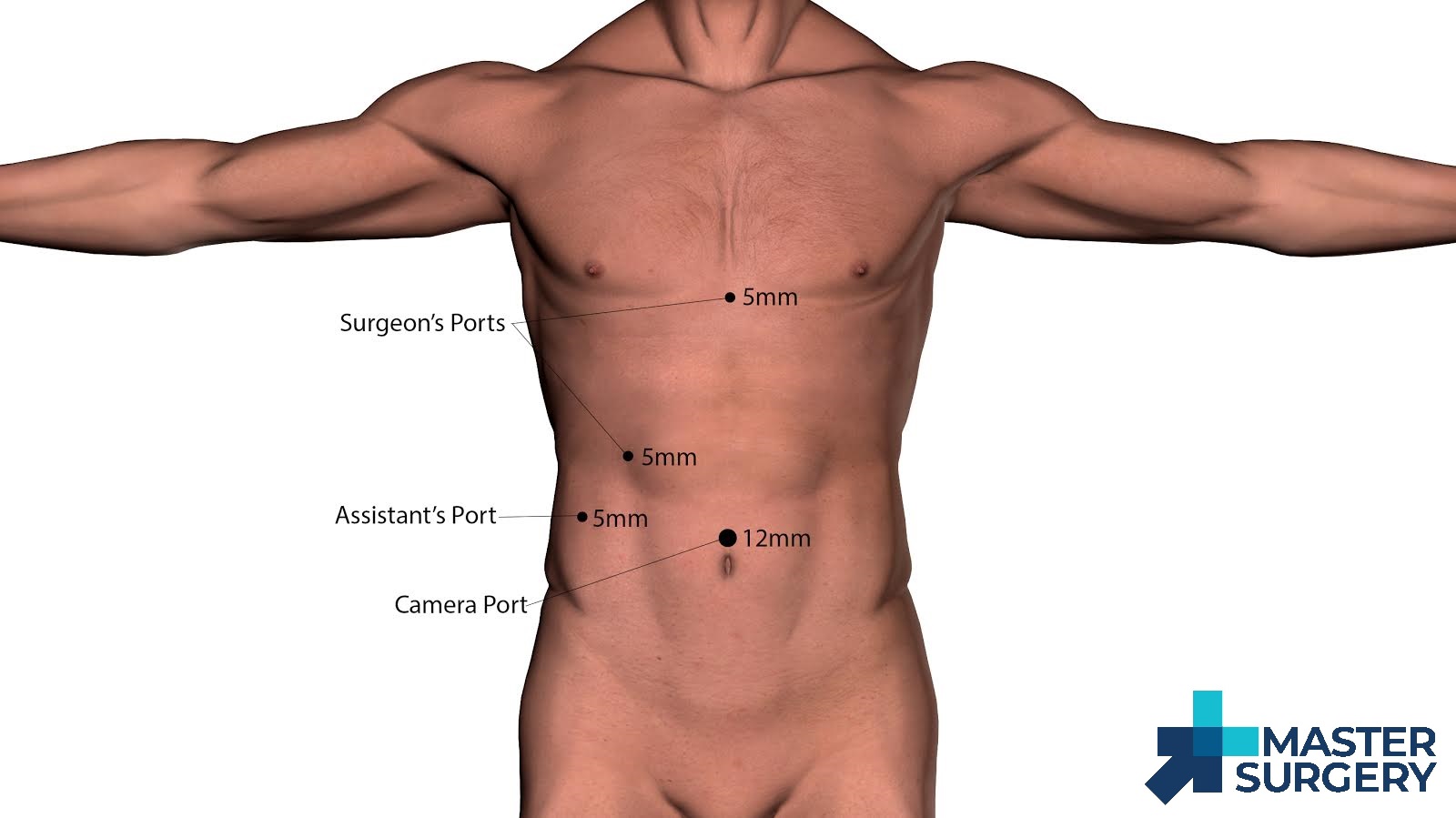 INDICATION FOR PROCEDURE: This is a 45-year-old female with a longstanding history of right upper quadrant pain that is postprandial pain. The preoperative ultrasound showed sludge and stones. Risks, benefits, and alternatives of laparoscopic cholecystectomy were explained to the patient. She was amenable to surgical intervention.

PROCEDURE IN DETAIL: The patient was seen in the preoperative holding area. History and physical, consents were reviewed and found to be up-to-date. She was then transferred from the preoperative holding area to the OR and secured on the OR table. A lap belt was placed and a time-out was called, acknowledging the patient, procedure, anatomical surgical sites, and all parties were in agreement consisting of attending surgeon, anesthesiologist, and circulating nurse. Perioperative antibiotics were given and general endotracheal anesthesia was administered by the anesthesia team. The abdomen was then prepped and draped in a standard fashion. We used the Hasson cutdown technique for a supraumbilical incision, entering the abdominal cavity and placed a 12-mm trocar. The abdomen was then insufflated 50 mmHg pressure without change in vital signs. Three additional trocars were placed, one in the subxyphoid region, one in the right midclavicular line around the right flank. The patient was then placed in steep reverse Trendelenburg position. The body of the gallbladder was raised cranially and there was adhesions to the fundus and infundibulum of the gallbladder. These were taken down with blunt dissection. We then used a hook electrocautery to dissect into the peritoneal lining along the infundibulum of the gallbladder. We used the Maryland dissector to dissect out with the cystic duct and cystic artery. We were able to see a single luminal structure and the gallbladder in one single artery. The lower one-third of the gallbladder was then dissected out. With the critical view identified, we then placed 3 clips distally on the cystic duct, 1 proximally and 2 clips distally on the cystic artery, one proximally. The cystic duct and cystic artery were transected with the EndoShears and the gallbladder was removed fromthe liver bed fossa using hook electrocautery. The gallbladder was placed in an EndoCatch bag and removed through the 12-mm trocar site. We then inspected the liver bed fossa. Hemostasis was excellent. There was no sign of bile drainage. We then irrigated a small amount and removed the irrigation. All trocars were removed under direct vision. The fascia was closed with a 2-0 Vicryl stitch. Local anesthetic was placed and the skin was closed with 4-0 Monocryl. The patient was seen gently awaken from anesthesia and moved from the OR table to the stretcher and was re-evaluated in the postoperative holding area.